Preparation time: a few weeks.
Activity: an Oxford-style debate on climate changes in the Baltic Sea region, lectures on environmental economics, presentations on local environmental policy
Place: schools in Reda and Wejherowo; Reda Culture House.
Participants: students from schools from Wejherowo and Reda; teachers, univeristy representatives, mayor of Reda.
Preparations:
A few weeks ahead of the event students at School nr 2 in Reda as well as students in Spoleczna School and School nr 8 in Wejherowo (four students from each town), were preparing themselves for the debate. They were looking for necessary information about the topic for the debate which was „ Climate changes in the Baltic Sea region”, learnt how to support their views and how to refute the opponents arguments.
The activity:
The event began with presentations made by local authorities, including the mayor of Reda, responsible for carrying out local environmental protection tasks as well as projects and actions promoting ecological behaviour. During a brief discussion, we summarized the May youth exchanges in Reda, Nykoebing and Klaipeda; then we had an opportunity to listen to an exciting lecture on environmental economics as well as participate in workshops and ecological games run by univeristy representatives.

The main feature of the meeting was an Oxford-style debate (Reda versus Wejherowo), which was attended by young people from three schools that have participated in “Let’s Do It” – Schools no. 1 and 2 from Reda and Szkoła Społeczna from Wejherowo; its subject was human influence on climate change on our planet. Reda schools tried to convince the audience that such changes were caused by people whereas youngsters from Wejherowo supported their natural origin.

After a long and substantive discussion, the audience accepted the convincing arguments of both sides and the debate ended in a fair tie. Each participant not only left the event rich in knowledge about the environmental care and protection, but also received a small (ecological, of course) souvenir. 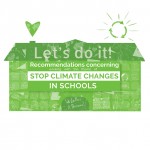